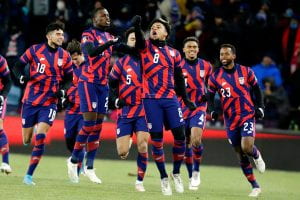 The 2022 World Cup officially kicked off last week, and somehow, now the whole world seems to love soccer. Everybody I talk to acts like they watch soccer every week and follow all of the leagues, whether it be the Premier League in the UK, or the Champions League in all of Europe. But let’s be honest! I know for a fact that some of these people have never watched a single minute of soccer in their lives!

Although my 11 year soccer career ended promptly after eighth grade, soccer has arguably been the biggest part of my family forever. If you walk into my house, you will be greeted by some random soccer game playing on the TV. (I am not exaggerating. Soccer is ALWAYS on.) My dad played soccer all the way through high school, my older brother played soccer through his senior year and still plays intramural at college, and — as everyone seems to know — my younger brother, who is a freshman here at Shaker, plays on the varsity team in addition to club teams year round.

Needless to say, I can confidently proclaim that I understand the rules and the game of soccer. But, I hate watching the World Cup. Not only has my TikTok “For You Page” been taken over by videos regarding the tournament, but the one USA game that was during school somehow made its way to the SmartBoard in my class. Was I excited because I wanted to go home to watch the game but couldn’t? Absolutely. But as the game progressed, I just started to get increasingly infuriated. With just blatantly wrong claims about every single play and every single call from the refs, watching a World Cup game in a class of 20 IB kids just reminded me of sitting next to my grandparents (who don’t know soccer for the life of them) watching my little brother play.

I am not saying that everyone needs to take the time to fully understand all of the intricacies of this sport; it is absolutely not necessary in order to watch the game. However, I just wanted to yell at everyone when they said one thing even slightly wrong.

There are countless other things I could say after hearing what some of these people were saying during the game, but I’ll keep them to myself. You get the gist!