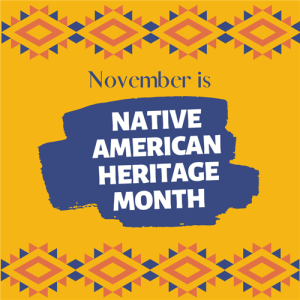 In honor of Native American Heritage Month, here are some of my favorite books/songs/television/etc. by Native Artists.

The first thing I will mention is obviously the iconic TV show: Reservation Dogs. This TV show has a fully Indigenous cast and crew and is relatable to Indigenous people around the world. However, you don’t have to be Native to enjoy the show. While you may not get every cultural reference, you don’t need to in order to enjoy this comedy series. Just try watching the trailer (it does contain swear words – sorry), and then I promise you’ll be hooked. 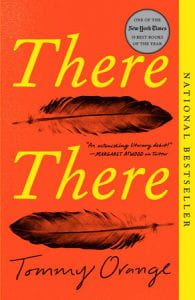 Now, in contrast to a show that takes place on the reservation, I want to choose a book that represents more Native experiences. When we think about Native Americans, we often think about them living on reservations. However, that is only one experience that Native people have. The book There There by Tommy Orange has multiple narrators, each with varying levels of connection to their Native community. This book is one of the most influential books I’ve read because it made me, as someone who doesn’t live on a reservation, feel less isolated from the Native community. At the end of the book, all the plot lines connect at a single event, a powwow.

Note regarding a powwow: a powwow is not a meeting. No matter how many times someone refers to a meeting as a “powwow,” the two are not the same.

Okay, so we have arrived at songs. My first song suggestion is going to be a serious one (or not as comedic as the following songs). One song I absolutely love is “Build a Bridge” by Nahko and Medicine for the People. This song beautifully describes the struggle of being Native but growing up in a different culture. It describes building a bridge between the two communities, the culture where he was raised, and his Indigenous culture. Quite the opposite of this song is the song “Rain Dance” by Lil Mike and Funny Bone. They performed this song on AGT, and it got them through to the next round. This song is just fun and a good time. They have many other songs; my other favorite is “Frybread Snackin’.” Frybread is also my favorite Navajo food, and I am so excited for whenever I go to New Mexico next, and can eat it again.

The last and most important way to honor Native American heritage month is to learn about Indigenous culture and its erasure. Learning and teaching others about Native American history is the most impactful way to support Native Americans. It is essential to also uplift Native voices as they fight for change and equality.