Skip to content
HomeNickelodeon and Homophobia by El Szalay

In recent years, it has become more normal than ever for LGBTQ+ people to see themselves represented in TV, books, and movies. While it’s a step in the right direction for equality, it doesn’t mean that homophobia is over and we’re all friends. In fact, homophobia still plagues the entertainment industry, especially when it comes to entertainment aimed for younger audiences. Case in point, Nickelodeon.

If you ask teenagers today what shows they grew up watching, they might say iCarly, SpongeBob SquarePants, or The Fairly Odd Parents, all of which aired on Nickelodeon in the 2000s. In particular, one of the most well-known shows from this era of Nickelodeon (and my favorite show ever) is the critically acclaimed series Avatar: The Last Airbender. Following the adventures of Aang, the last living Air Nomad and the only one capable of bending all four elements, this series aired from 2005-2008 and still holds up to today’s standards. It was so popular that in 2012, Nickelodeon aired the follow-up series about the Avatar after Aang, The Legend of Korra. 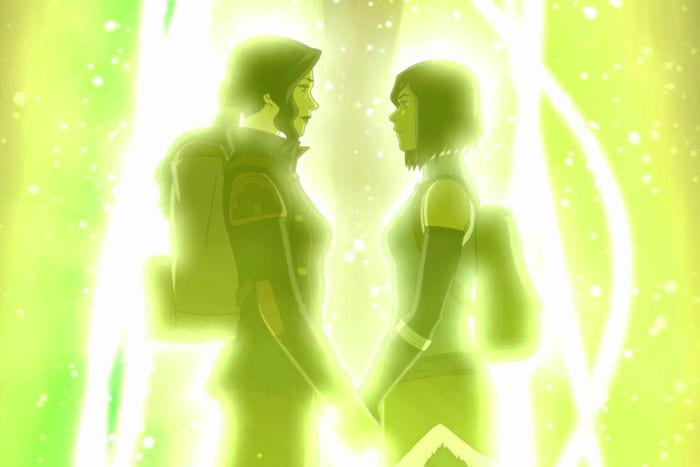 Contrary to popular opinion, I liked The Legend of Korra a lot. It’s not as good as the original series, but there’s a lot to like about it. Before watching, I had a few parts of the series spoiled for me, including the fact that Korra and Asami end up together at the end of the last season. Normally I’d be upset about getting spoiled, but the representation-starved lesbian in me was bouncing off the walls. It’s so rare to see sapphic couples in media that aren’t over-fetishized or end in heartbreak. I binged the whole show in a week, each episode making me more and more excited about the ending. However, by the time I finished the last episode, no relationship was confirmed. I was a bit disappointed and wanted answers. I did some research, and my findings left me disappointed, but not surprised.

As it turns out, Bryan Konietzko, co-creator of both Avatar: The Last Airbender and The Legend of Korra, posted on Tumblr that “Korrasami is canon” a few days after the final episode aired. In the post-series comics, the two are clearly dating, unlike how their relationship was merely hinted at in season four of the series. This is because Nickelodeon told the show’s creators, who were pushing for Korra and Asami to be canon during the final season, that there was a limit to how far they could go. There is also some speculation that this may also explain why The Legend of Korra‘s seasons were shorter than its predecessor. Considering that several straight couples have been explicitly confirmed on screen in Avatar: The Last Airbender and The Legend of  Korra, this clearly has to do with the fact that Korra and Asami are queer.

Like I said, this information is disappointing, but not surprising. TV shows and movies targeted towards children have historically shied away from LGBTQ+ representation out of fear of backlash from parents. If parents are angry enough at a TV channel for airing queer media, they won’t let their kids watch it anymore. Less viewers means less money, which is why the queer representation in The Legend of Korra is so subtle. Had Nickelodeon allowed Korra and Asami to confirm their relationship in the series, they would’ve been great representation of queer women in media. Girls yet to realize they are queer could look at Korra and Asami and realize that they want a relationship like theirs, and those of us who are out could see our community represented on screen. But out of fear of losing money, they made sure the final episode could be interpreted as two girls being the best of friends. It stops The Legend of Korra from being what I consider to be great sapphic representation (which may or may not be the topic of my next blog post), but the framework is definitely there. With shows like She-Ra and the Princesses of Power or The Owl House being able to include openly LGBTQ+ characters and relationships, the future of queerness in family-friendly media looks much brighter than before.