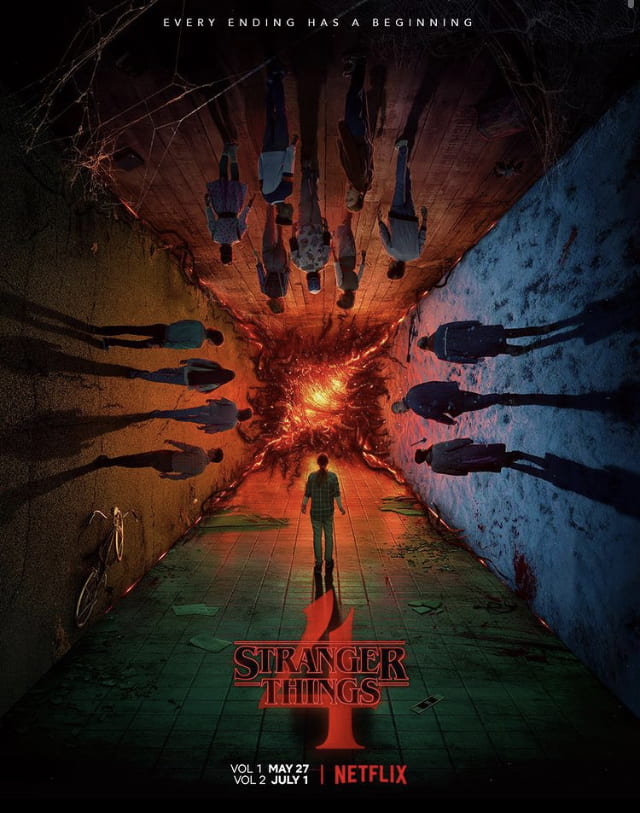 So who is ready for Stranger Things 4?

Ok, so, Joyce, Will, Jonathan, and Eleven are in California?! WHAT?! I was absolutely shocked by Eleven’s new hair– she’s obviously becoming a little Joyce. Which probably means something about her identity. In season two, we saw her morph into a Hopper, then “Bitchin” Eleven when she went to Chicago, and discover her own style in season three. I think Eleven’s identity is definitely tied to how she presents herself through clothing and hair.

We need to talk about this poster. There are clearly four parts. Each individual part was posted separately on the Stranger Things instagram page, so clearly there are four significant storylines in season four. The first being Hopper, Joyce, and Murray in snowy Russia. At the end of season three, Hopper disappeared. A teaser, released like two years ago, showed Hopper working in a labor camp in the Soviet Union. So at least we know he’s alive. But there’s no way they would have killed off Hopper. I also think this will be the season where Hopper and Joyce finally get together. The second poster shows Eleven in Hawkins lab. In one of the doorways there is a broken mirror reflecting young, season 1 Eleven. The third poster is of the Hawkins gang in the Creel House. The Creel House is a new storyline and setting. One of the major hints in the teaser was an old grandfather clock. I don’t have too many theories about what this means yet, maybe something has been lurking in Hawkins. And the last poster is of the California brochachos. In the background of every poster the Upside down is clearly seen. When every poster is put together it looks like all the characters are walking to the same place. By the end of the season, all the storylines will connect and come together. How that will happen, we’ll have to see.

The words–Every End Has a Beginning– is shown on each poster, signifying that the show is nearing its end. The creators of Stranger Things, the Duffer Brothers, have confirmed that season five will be the last season of Stranger Things. It feels bittersweet, because on the one hand I don’t want one of my favorite shows to end. I’ve been watching with my dad since I was twelve. As my younger sisters have gotten older, they have also joined in. When I spent the summer in Germany, my sister waited a month until I got home in August to watch Stranger Things 3 with me. But on the other hand, I don’t want the show to go too long and stop being good (ahem Grey’s Anatomy).

Since it’s been nearly three years since the third season of Stranger Things was released, I have very high expectations. I think the main reason for the wait was the delay from the pandemic. Stranger Things four began filming in the beginning of 2020. But once the pandemic hit, the show had to shut down production for a couple of months. I read somewhere that the Duffer Brothers utilized the time in quarantine to finish writing all the season four scripts before they went back to filming. The Duffer Brothers have also mentioned that the fourth season is the most ambitious season yet, because filming locations spanned across the world. The production was filmed in Lithuania, Atlanta, and New Mexico. Any filmmaker knows that the more locations you add to a project, the more complicated the project becomes.  Usually, Stranger Things is released all at once, which means that all the episodes have to be completely edited and finished by the time the show is released. Most shows released on TV premiere weekly, so filming and editing can be spread out more. The teaser for season four says that the season takes place during Spring Break in 1986. I think the season would have been released during the spring, but since production went long they had to push back the release date. Also since the fourth season will be released in two volumes, the show will have extra time to finish up the last episodes even when the first half of the season is already released. I think the wait will be worth it.

One thought on “Stranger Things 4 Ready by Nora Konrad”