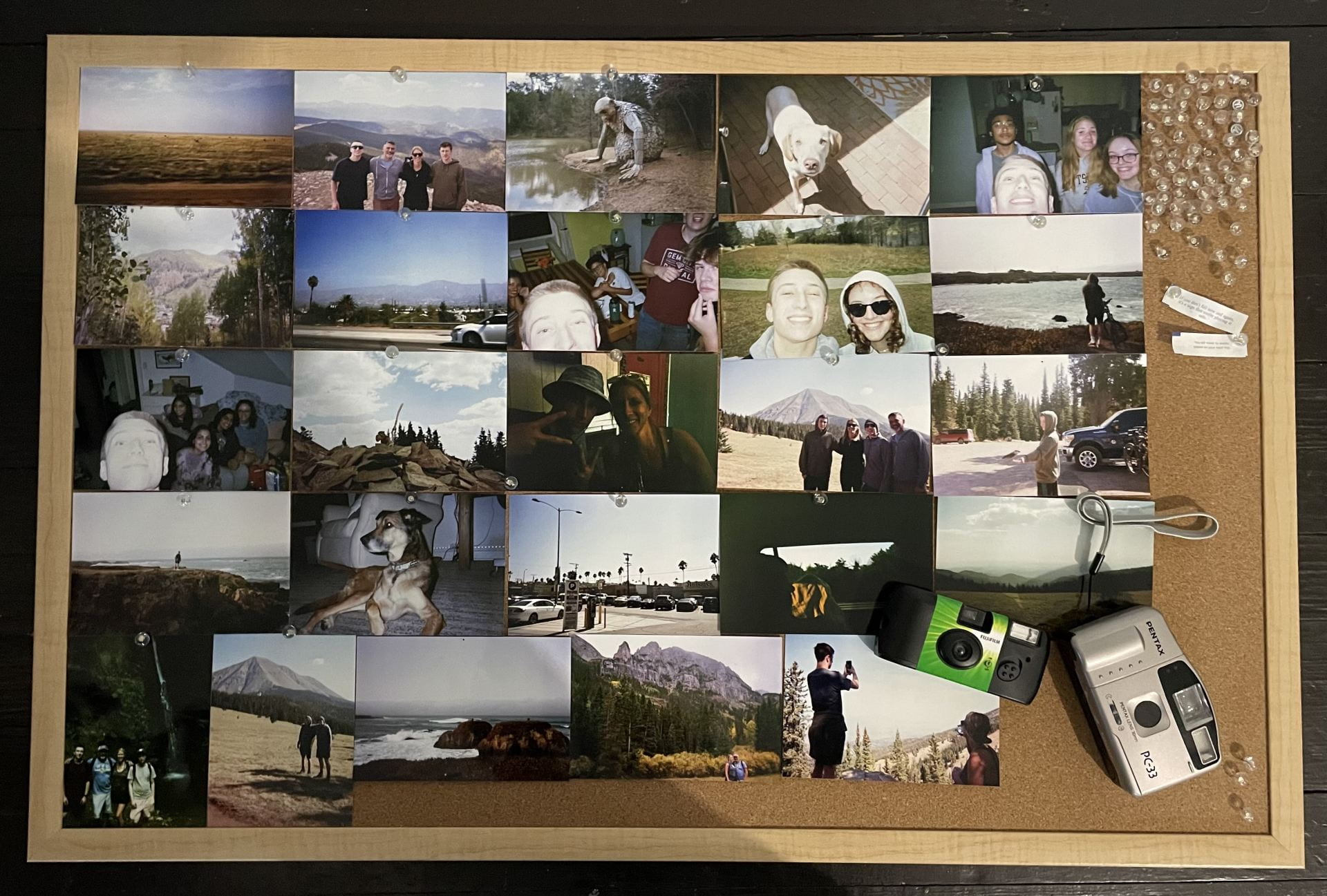 I love waiting for the envelope from Walgreens, anxious that my 24 pictures are going to be blurry or unrecognizable, and excited to finally see the little album I have been creating for months. My perspective on photography is that the quality of the image doesn’t matter, but the memory each photo holds does.

At the beginning of my junior year, my family decided to take a road trip to California to visit my mom’s extended family and make stops in Kansas and Colorado to visit my grandma and great aunt. I wasn’t too thrilled to be stuck in a car with my brother and parents for two weeks, but I didn’t have much of a choice.

Before we left, I had started experimenting with taking pictures on a disposable camera. I mainly photographed my family and friends, and only had one camera developed before we left for our trip. I found that when I took disposables, I didn’t care if I looked good, if the lighting was subpar, or if people were moving so much that they came out blurry in the photo. In fact, I started to love those things. I loved the idea of trying to capture hours of excitement into one frame, never wasting one of my 24 chances to click the shutter button, and not worrying about how pale the flash made me. I only cared about pinning the picture on my bulletin board and reliving the moment every time I saw it. So I decided to buy two cameras before leaving,

At the beginning of our trip, I began to take pictures from the car. I photographed the different landscapes we traveled through, from deserts and cornfields to mountains and hills. Then, as we stopped throughout our trip, I began photographing my family, the places we walked to, and the different places we stayed. I even got a close-up of a squirrel while I was on a hike, and my brother holding a random bird that flew into his hand. As our trip came to an end, and my disposable cameras had zero exposures left to take, I was excited to see the final products of my excessive picture-taking, hoping they would all be clear and colorful.

After I finally got home and gave my camera to Walgreens, I waited an entire week for my photos to come back. When they finally came, they turned out better than I could have imagined. Each photo was clear and every exposure had a story, one that wasn’t told over and over again through endless photos on my phone, but one that was physical and had meaning to me. The road trip cemented my love for film photography and influenced me to buy a point-and-shoot film camera, allowing me to buy cheaper rolls of film and capture even more moments in the future.

I don’t know if I will ever stop taking pictures, even if that means using my phone in the future, but film cameras have opened my eyes to what photography is all about. No matter how pale I look, how red the glare in everyone’s eyes is, or how blurry their faces are, I think each photo is perfect, and hopefully, in the future, the photos I took will tell those stories all over again.

2 thoughts on “Disposables by Kian Baker”