Skip to content
HomeThe Murderer and I: A Love Story by Maria Krouse 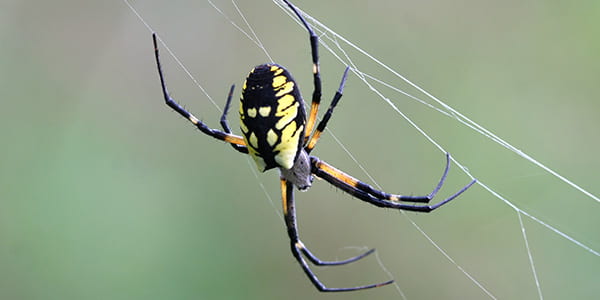 She was beautiful. Her eyes were dark and tantalizing. She had sharp inky leather boots and a yellow crochet tube dress. She had a mystique about her – a femme fatale aura leaving a trail of silky streamers when she walked. With legs stretching twice her torso and cheekbones jutting out like fangs, she could be on the cover of Vogue, or rather National Geographic. She was about the size of a coaster with eight legs, eight eyes, and looks that could kill.

I met this majestic woman at the age of 5. I was forced into the painstaking voyage to visit cow country Iowa with my family. We visited some distant cousins who lived in a quaint creaky farmhouse surrounded by miles of corn. Nestled beneath the chipped windows and rotting siding were blooming flowers in deep magentas and pale ochres. But most importantly, stretched between two large sunflower stocks was an architectural masterpiece. In the center of the palace, constructed from satin strings and prismatic water droplets, lay the queen. She was the ruler of the thousands of millimeters of jutting pebbles and menacing garden gnomes. I watched her bask in her throne for a few moments and as I turned and I heard a soft pluck. I gawked in horror as she put a delicate monarch butterfly into a deadly chokehold. The silk that once represented beauty and elegance was now being used as a murder weapon. She slowly swaddled the paralyzed butterfly carefully and thoughtfully almost like a mother to a newborn.

As I grew older I learned to love spiders.I would memorize their names, mannerisms, and eye patterns. Slowly, my fascination grew whenever I would hear a long sustained “Mariaaaaa,” or “You got to get Maria over here,” or the most common one, “Kill it!” I would come running. I would take my soft bare hands and gently coax the small arachnid into my palm. After the brief admiration, I would swiftly place the spider into a grassy bed. I became a protector of the spiders. I believe they are misunderstood. I think society’s collective fear and hatred of spiders is because they are so alien to us. Their strange and obscure traits aren’t something humans can identify with.

I own two plots at the local community garden. Each year in mid-May, I am hacking, prodding, but most importantly, feeling the earth’s heartbeat when I dig into the soil. I smile at the slimy earthworms and iridescent spiders. I believe spiders can teach us about ourselves and how we can learn to accept each other’s differences. Amidst the chaos, it can take something just as simple as appreciating a spider to open up a new way of thinking.