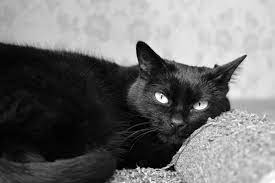 My parents got Zoe at a shelter about twenty-three years ago in Columbus, Ohio. She was a black kitten, with ears far too big for her scrawny body. It was during what they call, “kitten season,” when shelters are overwhelmed with stray felines and their children. Oftentimes, shelters are so overwhelmed that they have to resort to euthanization. Black cats are more likely to be euthanized than any other fur color. Zoe was only a few months old, and they were preparing to put her down. My parents adopted her in the nick of time, and she was with my family for twenty years.

My mom often describes how disheartening it is to see shelters filled with unadopted black cats. Zoe was one of many black cats that people refused to adopt, and therefore the excess faced an unfortunate fate, a fate not unfamiliar to black cats in shelters everywhere.

I’ve begun to think of myself as an advocate of sorts for black cats. There is a stigma surrounding the cats; that they are aggressive, or unlucky. Every year on Halloween we had to keep Zoe inside, for fear that she would be injured by some hostile pedestrians who prescribed themselves to the belief that black cats are unlucky, especially on Halloween. When my friends would come over, they would refuse to cross Zoe’s path, whining that it was unlucky. I don’t think it hurt Zoe’s feelings, but it certainly hurt mine.

There is no valid reason that black cats should be associated with poor luck, evil omens, or witchcraft. As a cat-lover, I’ve decided that for the rest of my days, I’ll only adopt black cats. They deserve love just like any other animal, and shouldn’t be disregarded. Go, black cats!