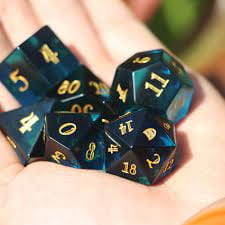 About a year ago, the Shaker Theatre Arts program put on a virtual production of She Kills Monsters, most of which takes place in a Dungeons and Dragons campaign. A friend and I were both in the show, and after a few weeks of rehearsals, they asked me if I wanted to actually play D&D. They said I could join a campaign with some of their friends, even though it had been running for a few months. I had never thought about trying it, but since the opportunity came up, I was like “Why not?” I got a character sheet made, and Haruko Crispina, my first ever D&D character, was born. Since it’s been about a year since her creation, I thought now was the perfect time to look back on the, for lack of a better word, interesting things she’s done.

Originally, I imagined Haruko as a book-smart voice of reason for the campaign who also makes a few questionable decisions on occasion. Until she started traveling with the rest of the party, she was a major bookworm who had never left her hometown, which is a safe haven for magic-users like herself. However, if there’s one thing I’ve learned after being in a few campaigns, it’s that your character will often end up being a bit different than you originally imagined. I’m not sure what exactly it was that made me change Haruko’s personality, but chances are that it was the very first session. As I said earlier, I’d joined this campaign a few months after it started, so the rest of the party had been traveling together for a bit. At the point Haruko was introduced, everyone else arrived in her hometown, and they were taking tests so they could be protected by this city in the future. While three people still had to pass their combat-based tests, two others were finished and decided to go watch the others. On the way, they met Haruko and invited her to come with them. They then proceeded to drink excessive amounts of chocolate milk as they watched the rest of the party complete their combat trials. Because of this incident, not only did Haruko join the party, but the group decided to call themselves the Chocolate Milk Club.

Fast forward about six months (in campaign, not real time), the Chocolate Milk Club found themselves “forcefully employed” by the government, which is a very long story. They had been there for about three months at this point, and Haruko gained the position of a junior researcher, as well as an intern under one of the main researchers of the institute, Lia Amakiir. Haruko had noticed that Lia hadn’t been coming to dinner for the past few weeks, and she decided to use her pager to tell Lia to come eat. There had been a few incidents with the Chocolate Milk Club and poorly sending messages, so the DM thought it would be funny to have me say exactly what it is Haruko was going to say to Lia. I have no clue what possessed me while I was improvising this message, but I started it with “hey shawty,” which greatly confused everyone there. I decided to roll with it, exclusively referring to Lia as shawty the entire session. Eventually, one of the party members asked why Haruko was calling her that, and I panicked because I didn’t have a reason that made sense in character. On the spot, I created the story of a book from Haruko’s childhood where the main character was a half-elf wizard who worked for the government as a scientist, much like Lia. This character happened to be named Shawty, and Haruko saw the similarities between her and Lia, and that’s how it all started. However, the best part of the shawty incident has to be when Haruko attempted to check out a book from the library, but she was too low-ranked to check it out, and so sirens started blaring and she was taken by security guards. Seeing her badge, the guards asked who her superior was, to which she replied, “Lia Shawty Amakiir.” This led to a lecture from Lia herself, not about setting off the library alarms, but about when and where Haruko can call her shawty.

So the moral of the story here is  1) try new things, because otherwise you’ll never know if they might click, 2) not everything will always turn out the way you imagine, but that doesn’t mean it’s bad, and 3) don’t call your boss shawty. At least, not in front of government officials.