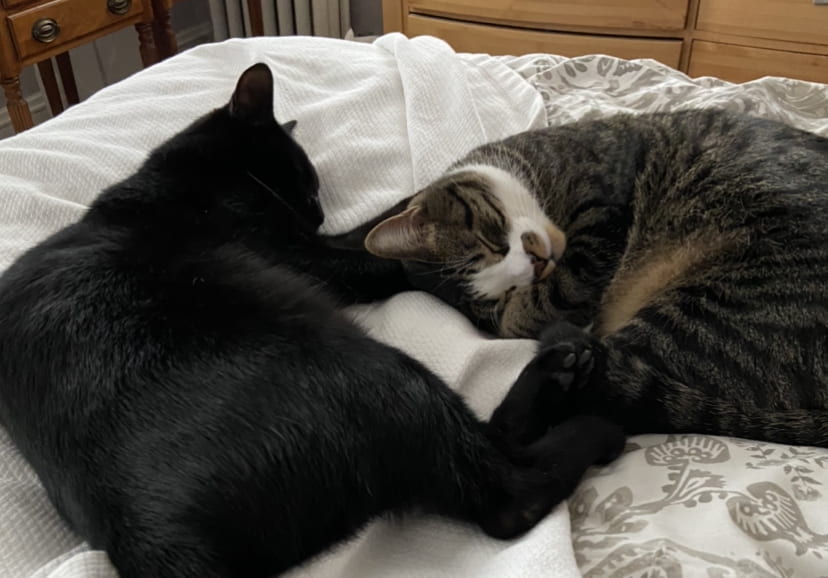 I’m in my third year of school here at Shaker Heights High School, and I’ll tell you now: Having a parent who teaches in your very own school makes your experience different from any other high schooler. My dad is pretty well-known around here. Plus, I have a rather obscure last name, meaning a formative part of my first week of the school year is being asked if my dad teaches here. There’s also the fact that my friends who take German or IB have him as a teacher, so it’s slightly awkward when I have friends in those programs over because they are not only showing up to my house, but to their teacher’s as well. Despite this, one of the best parts of having a teacher as a parent is that my dad knows my school email and occasionally sends things to it. Most of the time, he sends pictures for me to put in a project that were blocked on my school computer. However, there was one very memorable email from him at the beginning of my freshman year.

For context, we have two cats: Coco and Mickey. We adopted them as kittens in May of 2019, but this story took place about four months later in September. Mickey lived on the streets for a few months before we eventually adopted him, which is probably why he jumps at any opportunity to eat human food.

My freshman year English teacher gave us a research essay assignment pretty early on in the year, and I had fallen a bit behind in her class. My outline was not done when it was due, so I worked on it the following weekend to catch up. After we all ate lunch that day, my parents and younger siblings went to my little sister’s soccer game, meaning I was home alone. My phone was downstairs to keep me from getting too distracted from my outline, and my parents were fully aware I was doing this.

So I’m working along, making progress on my writing, but I took a break after a few hours to go downstairs to get a snack. While I was downstairs, I decided to check my phone. I noticed that my dad had texted me about thirty minutes ago, and there was also a notification from Gmail sent a few minutes later. I checked Gmail first since I thought it could be my English teacher asking about my outline. Instead, I was greeted by an email from my dad with the subject “Cats Eating Soup!!!!” It was short and to the point; all it said was that I needed to go take the soup bowl away from Mickey and email him back once I did that. I went to the kitchen, found the nearly empty soup bowl, but no cats in sight. So, I left the bowl on the table, not realizing that Mickey would come back a few minutes after I went back to my work and eat the rest of the tomato soup.

My family came back from the game an hour or so later, and I asked my dad about the “Cats Eating Soup” email. According to him, he had checked the security camera on his phone while I was upstairs working, and Mickey was downstairs eating a partially full bowl of tomato soup that my sister left out on the table after lunch. Since I was the only person home, he sent me a text telling me to go take away the soup, but then he remembered that I was nowhere near my phone and sent the email in hopes that I would see it on my computer. Like I said, I didn’t see the email until later and left the soup bowl where it was, and as it turns out, Mickey had gone back to the kitchen and eaten the rest of the soup. My family learned two things that day: Don’t leave your phone downstairs while you’re home alone, and always put the soup bowls in the dishwasher once you’re done eating.