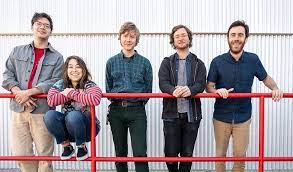 On the first of every month, I am faced with a daunting task: creating a playlist for the four weeks ahead. I´ve had this routine since freshman year; picking songs that I will listen to until the following month. Music is a constant in my life. I listen to it in the mornings, while my entire family is crammed into one bathroom to get ready for the day. I listen to it while I write, allowing the music to wash over me. I listen to it before bed, calming myself as my day comes to a close. On the first of October, I produced my playlist for the month ahead.

I was introduced to Phoebe Bridgers in the spring of my freshman year. Since then, she has become one of my absolute favorite artists. My favorite Phoebe songs vary each month. Last month, it was Chinese Satellite, a song I am quite accustomed to screaming in the shower. However, after I attended Phoebe Bridgers´ concert in The Flats on September 29, my favorite song quickly became Georgia. Georgia, as performed by Phoebe at the request of screaming teenagers, is a soft ballad about love unrequited. Phoebe wrote it when she was 16. There is quite a bit of teenage melodrama within the song but it isn’t overdone. It ends, like all the best songs, with Phoebe belting her heart out.

Uh oh. Another Phoebe song. But it’s different, I promise. That Funny Feeling was the encore at her concert, and immediately I fell in love with her cover of it. The song itself was originally in Bo Burnham’s comedy special, Inside. It is a reflection on the irony of our contemporary world. I think the lyrics are genius, ¨a gift shop at the gun range, a mass shooting at the mall.¨ I listened to it, embarrassingly, quite a bit when Inside was first released. And now Phoebe has a cover of it! It’s the best of both worlds.

Paprika by Japanese Breakfast feels like just some sort of happiness in my ears. I don’t even know how to explain it. I first listened to Paprika over the summer, in a rush to listen to all of the new summer albums and figure out my new favorite songs. It’s loud, melodic, and bright. Michelle Zauner´s (Japanese Breakfast) voice weaves between the cheerful rhythm. This song just makes me so joyous. I don’t really understand the lyrics, but they feel to me like some sort of dream.

Pinegrove is an alternative country/rock band based out of New Jersey. Now, if you know me, you know I am a staunch hater of country music. I can tolerate Garth Brooks or Willie Nelson, but anything else and I will probably have to leave the room. I’m mostly kidding. Maybe. However, Pinegrove is the greatest exception to my rule. I love Pinegrove. Their music reminds me of summer, of friends, of relaxation and cheer. That may not really make sense because their music is to a certain extent, slightly depressing, but New Friends reminds me of starting school and leaving my summer behind. It’s not sad- it´s exciting. New friends, yay!

In the Aeroplane Over the Sea by Neutral Milk Hotel

This song, and the entire album,  is a masterpiece. Neutral Milk Hotel is one of my favorite bands ever. In the Aeroplane Over the Sea is their 1999 sophomore album. I can´t even count how many times I´ve listened to it in its entirety. I know very few Neutral Milk Hotel enjoyers. Most of my friends just tell me to shut it off every time it´s on in the car. But I stand by my opinions. Neutral Milk Hotel is just good.