My friend recently said to me, “You’re so ready for college, you’re only good at making instant food.” I interpreted this as a both a compliment and an insult, because yes, I will be ready for college when there’s not homemade, healthy options everywhere, but I also knew there was a slight jab at my lack of cooking ability in her statement. And just as a precursor, I’m perfectly healthy and get all my food groups and eat my vegetables. But in the end I really am the Queen of Instant Cooking. I pride myself on my ability to take a microwaveable meal and turn it into something above average. And I’m talking about the 99 cent ramens and mac and cheeses, not Trader Joe’s chicken tikka masala and cauliflower stir fry. Finding smaller compliments to go in these meals are what make up my cooking expertise. Spices and sauces in my 99 cent ramen and additional cheeses, breadcrumbs, and vegetables in my mac and cheese are some classic dishes. I seriously think I can make delicious meals out of any cheap instant lunch when it’s paired with a kitchen that has just enough for a snack and just not enough for a wholly cooked meal. Now that I think about it, this could be a fantastic idea for an amateur chef reality show.

Alternatively, one thing that I like to make a lot which also requires no skill whatsoever is chocolate covered strawberries and other foods. This Tuesday when I was at home sick I made chocolate covered food for the first time since maybe last year. Taking practically everything dippable in my house, I ended with chocolate covered strawberries, bananas, pretzels, pineapple, grapes, oreos, and marshmallows. I don’t know why chocolate covered snacks are perhaps one of my favorite things on Earth but they are and I’ve been eating them at way too fast a pace since they’ve been in the fridge. They’re one of my favorite things to make for people as gifts for birthdays, general congratulations, etc; but they’re also one of most fun things to make to cheer myself up, for example, when I’m sick, which is why it’s peculiar because I really don’t like true baking or cooking. So there’s a strange balance between the types of things I eat when there’s not traditional meals available, but I’m healthy and enjoy what I make, so is there really a problem? The answer is no 🙂 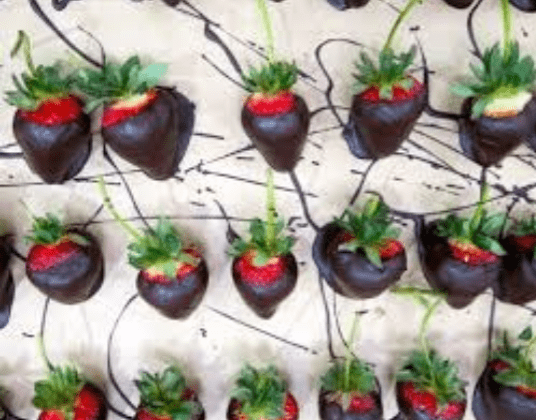