Hey guys, back at it again with another review! This time I will be introducing you all to a new documentary series on Netflix titled Cheer.

To get things straight, I, in fact, have never cheered in my entire life, and my mind was filled with misconceptions about this daunting and time-consuming sport. Cheer centers on the fourteen-time champion junior college Navarro. Viewers are taken into a six-episode binge of the backgrounds of the Navarro squad and their resilient head coach Monica Aldama. The series as a whole focuses on the team’s preparation for the national competition in Daytona, Florida.

The show is not only six hours full of tumbling and grueling injuries, but viewers become connected to each and every one of the Navarro cheerleaders and their amazing, yet heartbreaking, backstories. Such stories range from a small-town girl who had to live in a trailer with only her brother while she was in high school, to a social media icon within the cheer community.

Navarro College is a junior college centered in Corsicana, Texas, an extremely conservative and old-style town of living. In addition, many of the Navarro cheerleaders feel out of place due to conflicting views with the citizens of Corsicana. Cheer takes people on a rollercoaster of emotions, where one learns that regardless of their background, the Navarro team and the entire cheer community is one big family. 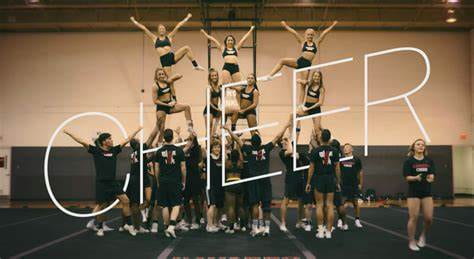 The series itself has now set many of the cheerleaders onto new paths in their lives, due to the fact that one can only cheer through college, there are not many careers involving the sport after. For example, scene-stealer, Jerry, with his “over the top attitude”, as explained by Aldama, was given the opportunity to interview Hollywood’s biggest stars at this year’s Oscars Ceremony. Seeing the Navarro cheer squad persist through injuries and a tremendous amount of work and motivation by their peers shows viewers that cheer is not just a social status boost in school. Their backgrounds are all extremely different, yet the mat and team itself is what brings them together and makes them one. I would hate to fully spoil the series, yet the show leaves viewers feeling impressed and a sudden urge to want to hit the mat and start tumbling!