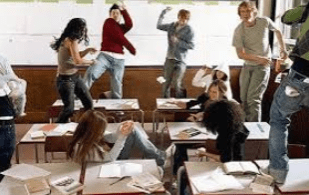 Students love it, teachers hate it; that moment when a teacher’s lesson plan falls apart.

Whether it be a website not working, a video not playing, or a handout misprinted, the effect is all the same. The addition of teachers’ heavy reliance on Chromebooks has made this an even more frequent occurrence.

More experienced teachers are usually unphased, being able to quickly come up with an alternative or fix the problem, often without the students realizing anything is off. However, the less resourceful teachers can unknowingly face the consequences of a shifted power dynamic if they aren’t careful.

Let me take a moment here to point out that this is blog is not about any teacher in particular; almost all of them experience it at one point or another. That said, I think it’s no secret that certain teachers rank higher than others on the list of “teachers whose classroom always go according to plan.”

Now that that’s out of the way, here’s a list of the most common student responses to those few blissful minutes of a powerless room.

The Jokesters: maybe most common in freshman/sophomore classes (or maybe not), these kids will turn the room into an open stage with a varying degree of vulgarity, depending on how discombobulated their teacher is at the moment. The key for these jokesters is they need to be enabled by the rest of the class. No laughs means no jokes. But, the more laughs they get, the louder and more inappropriate they get, forcing the teacher to then try and take control of the classroom back, possibly without even having a lesson plan to implement.

The Good Students: these kids either 1.) feel bad for the teacher or 2.) are scared of them. They’ll probably try to help them fix the problem, or at the very least, just sit there quietly on their phone. If you see a “Good Student” acting like this next time your teacher is dealing with a lesson plan mishap, it’s likely because they’re strict rule followers or because they plan on asking the teacher for a letter of recommendation in the future.

The “Can I go to the bathroom?” kids: If a student asks to go the bathroom while your teacher is frantically trying to fix their computer, you can bet this kid is probably not coming back, most likely to wander the halls for half an hour while scrolling through their phone. That said, from my experience, “Can I go to the bathroom” kids typically spend the whole class period on their phone anyway, but in these particular instances they like to take the opportunity to do it by their own means.

So there you have it: the three most common results of a teacher’s lesson plan getting screwed up and them not being able to figure out what to do while simultaneously maintaining control of the class. As tempting as it is, I’m not going to get into how this is all magnified 10x when there’s a substitute teacher whose qualifications often seem questionable.

To conclude, I’ll admit that I’ve found myself to be all three types of those students at different points in my high school career. I’m typically a rule follower, and definitely needed to have teachers willing to write my rec letters, but I usually can’t just  pass up the opportunity to tell a good joke to a captive audience.