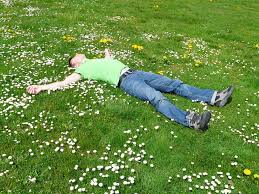 Senioritis is not an affliction of laziness. It’s an awakening, an epiphany, a new way of living. For me, it means not always raising my hand in class when I don’t understand something immediately, realizing that it will all be okay, that I’ll get it. It means putting my homework away and going to bed early and understanding that I don’t have to think about everything right then, that things will work out in due time. It means not worrying that I’ll forget something important, trusting my mind to remember. It means thinking about things that aren’t school, and putting them first sometimes. Like friends and family.

It doesn’t mean that my grades are falling, or that I’m copying homework, or skipping classes. This is my senioritis, and I wish I’d found it earlier. 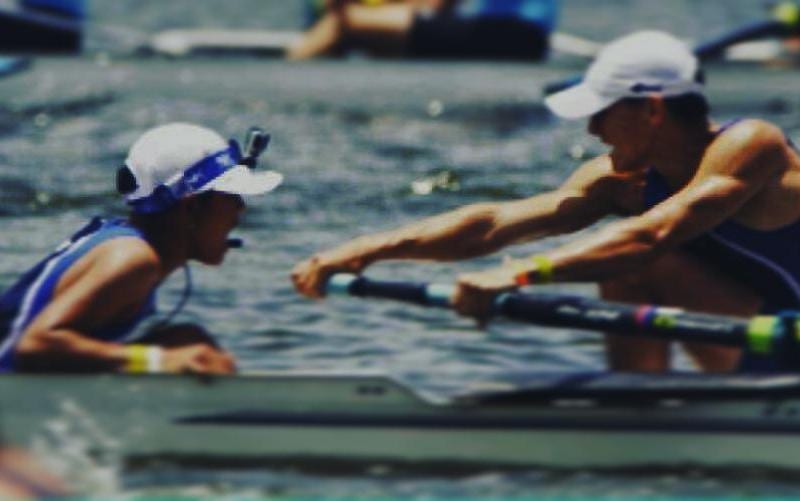 Please note: there will be some serious ranting below. Viewer discretion advised.

Time and time again, my parents have asked me why I haven’t quit crew. At this point, I would’ve laughed in your face if you told me that I was going to stay with this sport for four years. It is a huge time commitment, which is why this year, my teammates have dropped like flies. Also, I am one of the few who shoulder the huge burden of being a coxswain.

I might’ve mentioned this before, but being a coxswain bears huge responsibility. By steering the boat, giving technique adjustments, motivational calls and creating race plans, this role isn’t for the faint hearted. Freshman and sophomore year, to say I had a rough adjustment would just be grazing the surface. I was horrid at steering, for one. Always on the wrong side of the river, I was almost always the butt of all my coach’s deafening yells. The worst part of it is, I truly believed I had let my teammates, and especially myself, down. Because I was, let’s face it, the worst cox on the team, I was always thrust into the weakest boats. It didn’t help that I was incredibly shy, puny girl who was too nervous to make enough calls to lead us to victory. Losing became habit, and quitting was always on my radar. I can’t even begin to describe how heartbroken I was after every regatta after failing my team yet again, all the wasted tears flowing down my face as I try to hide it in agony. I stood on the side as the other boats, although they didn’t always win from the tough competition, make racing and succeeding look easy. Trying to be happy for my other teammates, I couldn’t quite shake the feelings of jealousy pulsing through my veins.

However, on October 2nd, 2016, I coxed the women’s novice eight and four to victory (well, second and third place, close enough). By far, it was one of the best days of my life. The sound of the two medals clinking against my stomach radiated the feeling of accomplishment from my skin: I had finally done something right for my team. This year at the Head of the Cuyahoga, when I coxed the novice girl’s eight and won bronze, I had this same feeling. For once in the years I have participated in this competition, my face wasn’t covered in dry tears from yet another failure. The smiles on my teammates’ faces were contagious, and once again, I didn’t feel worthless or helpless.

Unfortunately, these are rare occurrences. If you are a coxswain, be prepared to be moved like a ping pong ball across a slew of boats– girls, boys, novice, jv, varsity: you name it, it is bound to happen. I can’t even begin to name the occurrences when this has happened to me. I completely understand that the coaches have to experiment with different lineups in the beginning, but when the regattas approach, I wish we could practice with the same ones as on race day.

If you’re still here, I will be immensely surprised. However, just because I’ve listed the greatest obstacles I’ve faced doesn’t mean there isn’t something to be gained either. All the workout the rowing team does in the fall, winter, spring and the end of summer makes us more fit. When joining the rowers on the ergs in the winter, I myself have felt more comfortable in my own skin and in-shape than before. We slowly but surely form a tightly-knit family, especially from team bonding activities. From freshman year, I have became more social and therefore have bettered my coxing skills significantly. I am incredibly proud of my progress, despite all the setbacks that have been thrown in my face.

To answer my parents’ question, I honestly don’t know what has kept me on the team for so long. Maybe it’s the adrenaline rush while racing and speeding by another boat on occasion. Maybe its the feeling of belonging somewhere and finally fitting in. Most definitely it is from the desire to win and make my teammates proud. Crew, this is my message: sorry, but I’m not going anywhere. You’re not getting rid of me that easily! No matter how cliché this is, I will not back down from obstacles that come my way, no matter what it takes. 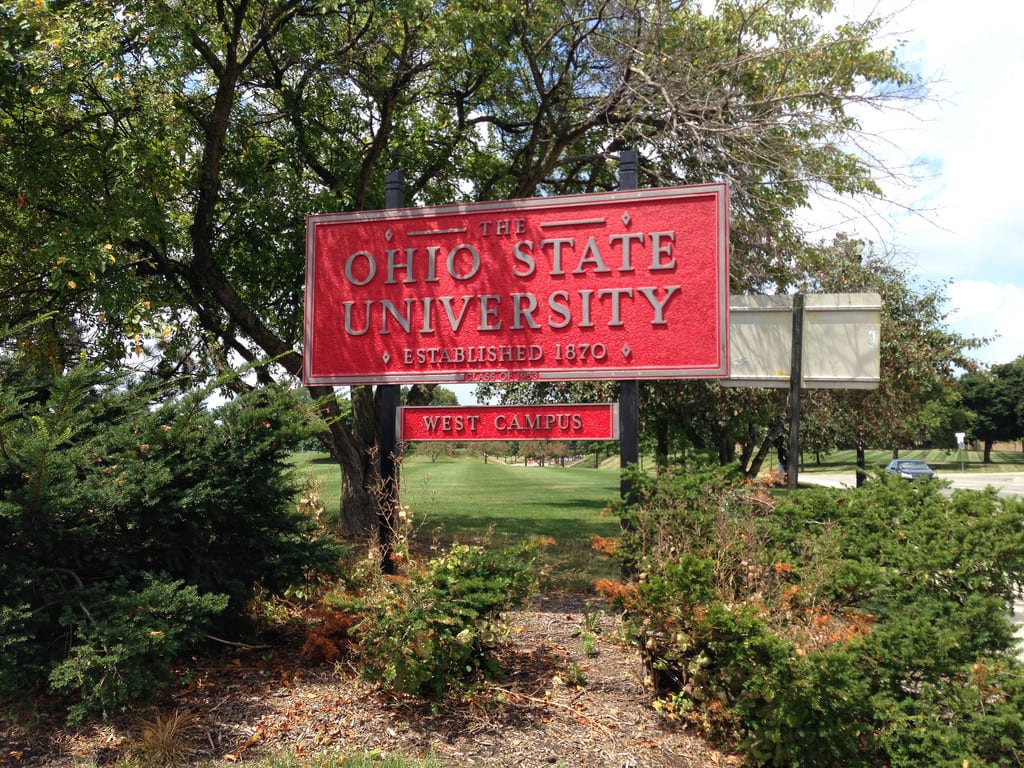 Ever since the day I turned fifteen, I’ve been bombarded with a single question. You learn to tune it out, you know, and it becomes white noise, like flies buzzing around your ears or the static on an old T.V. And, the more they ask you that same question, the more you realize that you have no idea what the answer is. You shrug. You mumble, “I don’t know.” You avoid it like the freaking plague.

“So, Claire, where do you think you’ll be going after high school?”

Oy vey. For the past few months, I’ve simply been regurgitating the names of the schools to which I applied. I would rattle them off like items on a grocery list, speeding through them as quickly as possible. After all, a question that you’ve been asked over and over again for years can get pretty boring to answer. Seeing other people answer the question can be even worse. You’re happy for them, of course, but you’re jealous too. They have an answer, a definitive plan for the next four years of their life.

About a week ago, I finally got my answer. I no longer dread the question — I embrace it. “I’m going to Ohio State!” I say confidently. And then I answer the rest of their seemingly endless questions: What are you studying? Psychology. Are you in any programs? Yes, I’m in the Honors Program. Do you know where you’ll be living? No, because they won’t email me my freaking housing contract. I tell them about my roommate, who I met on Facebook, and how I plan on decorating my room, and what activities I want to participate in.

So, I’ve finally answered your question. I’m going to THE Ohio State University, and I couldn’t be happier. 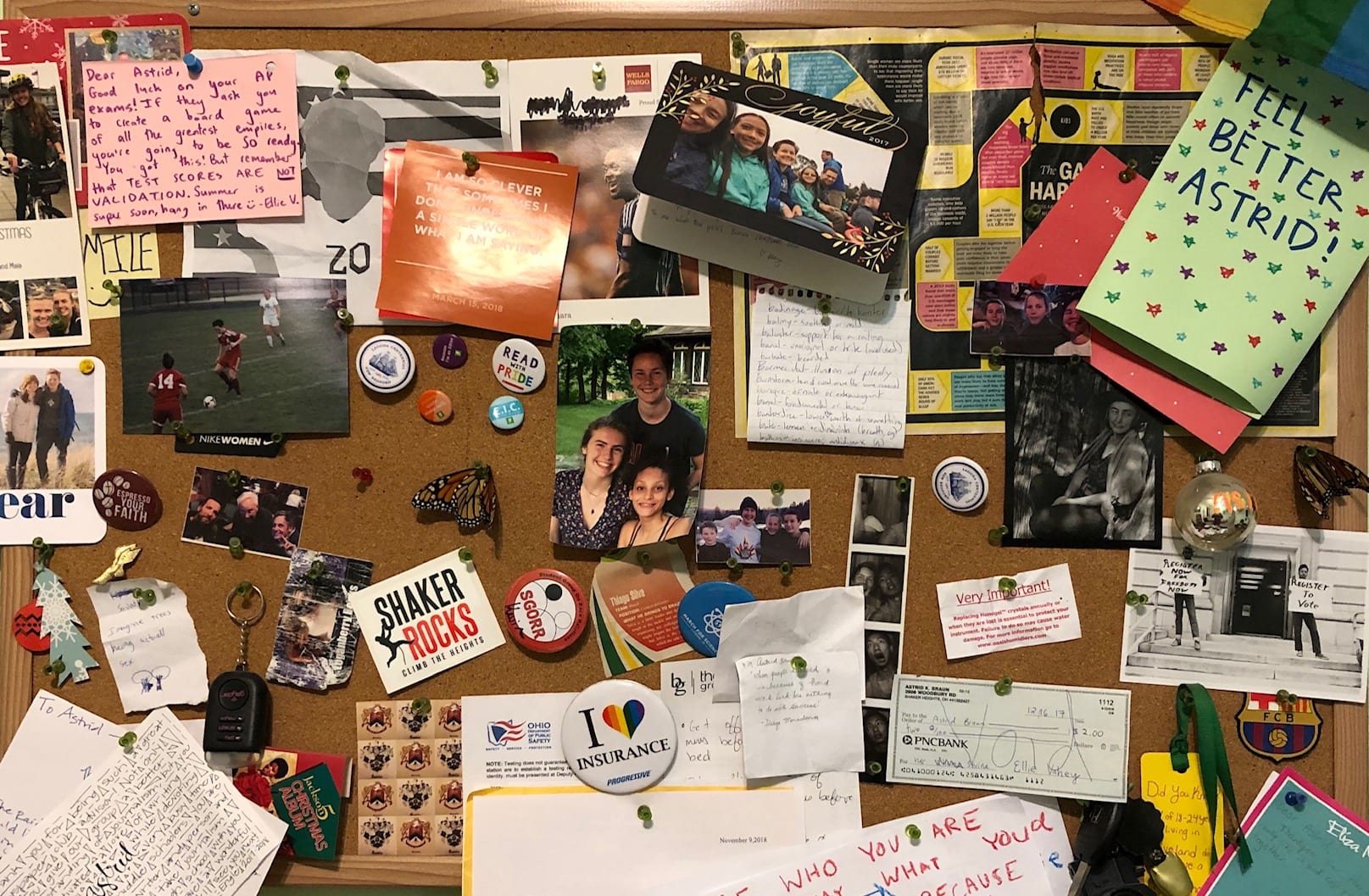 Between the two windows across from my bed hangs a cork bulletin board with no specified purpose. I don’t remember when we put it up there, though it was probably after my room was painted light green — my beloved white wallpaper with tulips on it had torn, and was dirtied from blackened hands that ran along it before bedtime.

The bulletin board was not something I had asked for, so when it took its place on the wall, I had no concrete plans for its use. Should I have tacked up photos of family and friends, or used it as an extension of my desktop, which rests directly beneath it? For a while, I just left the board blank. After a few weeks with it, I had only tacked up a few extra papers, which had previously been scattered on my desk.

One morning, near the beginning of this year, I laid on my bed and scanned my room. My bulletin board drew my attention for the first time in a long while. Over the four or so years it had been up, I had tidied it up in spring cleanings, and weeded out everything that no longer had any significance to me. But, when I looked at it that winter day, I realized that my board represented me well. It had accumulated an assortment of knick knacks, papers, and photos; all of the items represented a different part of me. Much in the way one shares music with a new friend, or suggests their favorite books or movies, I could share this board with someone, and it would provide an outline for my values and personality.

Though, at this point, I know myself well, there is a new sense of identity gained from seeing a physical manifestation of oneself. Some items have remained on that board since it first arrived, and others I added just a week or two ago — regardless, all of those items coalesce to form a mosaic of my life.