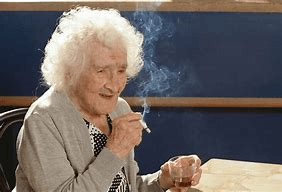 She was born a decade removed from the American Civil War, and died a few short years before 9/11. When World War II ended, she was 70 years old. Then she lasted another 50 years. She lived more than two lifetimes, especially by 1875 standards.

Let’s run down a list of things she experienced.

She was a young woman when the Wright Brothers first took off from Kitty Hawk in 1903. The world became a hell of a lot smaller in the following decades. Over her life. she saw airplanes revolutionize the way we travel.

Thomas Edison tested his first light bulb in 1878. Nowadays, light bulbs have taken over the developed world. It’s hard to imagine an American home without them.

Alexander Graham Bell received a patent for the telephone in 1876. Over the next 120 years, it spread like wildfire and connected humans in a way never done before.

Basketball wasn’t invented until 1891. In the 1996-97 season, Michael Jordan was on his way to his 5th championship.

Geopolitically, she saw almost everything there is to see. The second wave of colonization effectively began with the Berlin Conference in 1884-85. She saw the scramble for Africa, World War I, World War II, de-colonization, and the Cold War’s beginning and end. We think of all these events as somewhat separate, with certain links connecting them. Although their circumstances differ, Jeanne Calment witnessed them all.

With so many years, however, she lived through plenty of tragedies. She only had one daughter and one grandson. Her husband, Fernand, died in 1942. Her daughter, Yvonne, died in 1934, on her 36th birthday. Her brother, François, died in 1962, while her son-in-law, Joseph, died in 1963.

Her only grandson, Frédéric, died in August 1963 in an automobile accident. Of all the things she lived through, I’m sure that stung especially hard. He was 37.

Imaging being old as long as she was. If we consider 70 to be old, she was old for over 50 years. It makes you wonder; how long is too long?