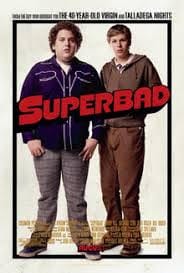 This movie holds a special place in my heart. And, it’s timeless. I laugh no less now than I did when I was six years old. A tasteful blend of crude humor and physical comedy, this film exhibits excellent comedic timing and captivating graphics that will leave you satisfied and laughing for days afterward.

Will Ferrell and John C. Reily demonstrate excellent comedic synergy in depicting the precarious relationship between two middle-aged men living at home with their parents. Director Adam McKay puts together a fast-paced, absurdist comedy that truly deserves its own category. Parental discretion is definitely advised.

This is an offbeat comedy…definitely offbeat. Awkward silences are curated masterfully and interrupted frequently by Jack Black’s unmatched comedic instinct. Plus, his accent is hilarious, almost perfectly exaggerated for the genre.

Kristen Wiig and Maya Rudolph are perhaps the most hilarious comedic duo in hollywood. This film takes full advantage of the talent at its disposal, featuring appearances from Ellie Kemper, Melissa McCarthy, and Rebel Wilson.

Judd Apatow has emerged as one of the premier comedy directors of our era, and Superbad may be the film that best showcases this. Featuring the likes of Jonah Hill, Michael Cera, Emma Stone, Bill Hader and Seth Rogen, this movie just may end up at the top of your list, too.