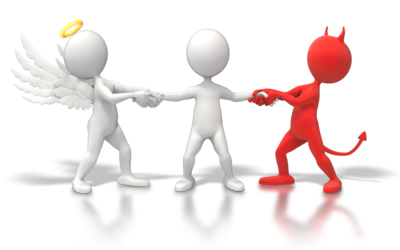 I came up with a philosophical anecdote—if you can call it that—a few months ago. Two books inspired me—East of Eden by John Steinbeck and A Clockwork Orange by Anthony Burgess. Both novels focus on the existence of evil in our world, and what role choice plays in it.

The fable starts with a rich man whose expensive car drove into a ditch, along a lone country road. He is standing outside on the road, waiting for someone to come by and help. From here, the story splits up into three different timelines. In the first timeline, an angel approaches the unlucky man, and without a moment’s hesitation, it drags his car out, and accompanies him to the nearest town, where he is nursed back to health. In the second timeline, a demon comes along, and without a moment of hesitation, it stabs him to death, steals his bulging wallet, and hides the body in a field so no one can find it. In the final timeline, a human happens upon the accident. This is where the story ends.

The cliffhanger is essential to the meaning of the fable, because no one can say for sure what a human would do in that situation. We all know that there are human beings who commit wonderful acts of kindness, as well as horrible crimes. However, angels are bound to good. Please note that when I say angel, I do not necessarily mean just the ecclesiastical type. I am referring to any theoretical being (a robot, for instance) that is bound to doing only good—much like protagonist Alex in the second half of Burgess’s dystopian novel. An angel does not see evil as an option; it cannot comprehend it. An angel contemplating about wickedness would feel much like a fish contemplating walking.

On the other hand, demons view good much in the same way. Similar to my angel definition, a demon is a being which lacks internal goodness. This includes people who are born psychopaths. In East of Eden, Steinbeck discusses a similar type of being, though note that he uses the word “monster” instead of “demon”:

“To a monster the norm must seem monstrous, since everyone is normal to himself. To the inner monster it must be even more obscure, since he has no visible thing to compare with others. To a criminal, honesty is foolish. You must not forget that a monster is only a variation, and that to a monster the norm is monstrous.”

He is leading into a section introducing Cathy Ames, the villain of East of Eden. His point is that evil, as it manifests in psychopaths, is not experienced as anything outside the norm. Kindess would seem demonic to a demon.

Anthony Burgess’ theme in A Clockwork Orange is that the choice to commit evil acts is the condition that makes us human. Steinbeck has a similar theme in East of Eden, however it focuses much more on the freedom to choose good over evil. Both novels are important to read, and they both revolve around a similar axiom—humanity exists in the freedom to choose between right and wrong. We are neither angels nor demons.

The question I brought up with the fable is this: what would the human do? We can’t say for sure. It depends on the person, as well as the day that person was having. Externally, society would suggest that we should strive for good. Internally, we could wonder whether humans are mostly good or evil forever and ever—I like to think the former, but someone could find a lot of evidence for the latter. Regardless of what you think, there is no denying the value of the choices we are allowed. Know that for every good deed you’ve done, for every kind word you’ve said, there has always been a different option, and for a moment you thought about it, possibly even considered it. You are not born good or evil, but you always have the option to be both. That is the human gift.