Skip to content
HomeStick to Your Strengths by Caitlin Cullina 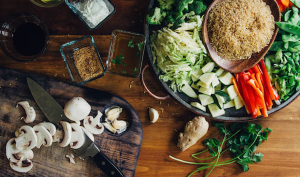 “Anyone can cook as long as they can read and tell time.” My dad told me that was something that my nana would always say, but she forgot to mention that having the ability “to cook” doesn’t mean that a person can cook well. I am living proof that I can do a lot of damage in the kitchen even if I have access to a recipe and a timer. I’ve tried again and again to measure ingredients as precisely as possible and follow directions to the “t”, but every time I manage to mess something up. I just don’t have the instincts or the common sense. Whenever I step up to the stove it’s like the heat is too much and I get frazzled.

The thing is though that my mom is an amazing chef, she even went to cooking school. I swear she could win Chopped if she tried. She can take whatever’s in the fridge, throw it all together and somehow end up with some fantastic and delicious new dish. And if she tries any food at a restaurant that she likes, she can recreate it at home by picking apart the ingredients after just a few bites. Not only that, if she tries something she doesn’t like she’ll know exactly what to add to make it better. She has basically an entire cookbook of recipes she either created or “tweaked” to make her own.

So that definitely doesn’t make me feel better about my skills. And if that wasn’t enough, my brother and sister also inherited the cooking gene. From a young age, they could waltz into the kitchen right beside my mom, towel over their shoulders and spatula in hand. I just sat at the table at the edge of the room and watched the magic unfold. I always felt so left out when my family was all in the kitchen together, each making a different part of a meal. I was only called in when it came time to wash pots and clean counters.

Now that I’m older my mom doesn’t have time to cook as much and both of my siblings are away at college. I’ve tried to expand what I can do in the kitchen so I don’t end up eating frozen foods for every meal. Sometimes I might make pancakes or sauteed vegetables. Granted, it doesn’t always go well, but I’m doing my best. I’m just hoping that when I leave home I can find someone else who’s as good a cook as my mom so that I can stick to my strong suit when it comes to food: eating.