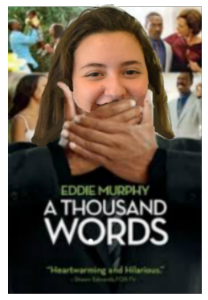 According to a study done in 1984 by Gyles Brandreth, the average person speaks about 860.3 million words throughout their life. Imagine if you only had 1 million words. Imagine if you wore a little watch type device that ticked with every word you said. Imagine if once all of your words were used up, that was it. This might sound like a dystopian novel, or like a Black Mirror episode, but imagine how much more thoughtful of a place the world would be.

If you had that 1 million word limit, don’t you think that you would be so much more careful about what you said? We would spend so much less time gossiping, and so much more time listening. I would read the dictionary back and forth to find the perfect words. I definitely wouldn’t complain. Gone would be the days of saying “ugh I’m so tired,” because those would literally be four words I’d never get back. I would really genuinely listen to people, and to how they use their 1 million words, and I would really genuinely think about how I want to use my own. When you think about it, it’s kind of incredible that we get limitless words. And with that I think that we’ve forgotten how much words have meaning. What would you say?