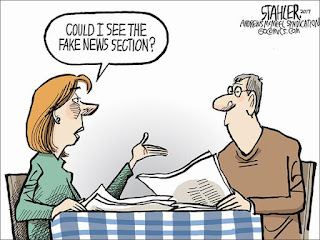 Count how many times a day you hear an adult say “In my day, we didn’t have phones! When we wanted ____ we had to…” 99% of the time I try and dismiss those comments, because I mean, come on. It’s not our fault that its 2017 and we’re using our resources. However there has always been one situation that I can’t help but kind of agree with: the newspaper. Online or print. When was the last time that you picked up an actual newspaper? Not for a school project, not even for the comics, but to find out what the heck is going on in the world.

I know that many people like to disassociate themselves from politics. Which is fair, because recently it seems like most of the headlines offend or scare a massive percent of the population. I just do not believe that dissociating yourself from politics is an excuse to disassociate yourself from current events as a whole. While Donald Trump has been distracting America with an attack on the NFL and violent threats toward North Korea, Burundi and South Sudan are both border lining genocides, Somalia, Nigeria, South Sudan, and Yemen continue to suffer from devastating famines, along with many, many more global issues going on as we speak.

Maybe it’s not the most positive and fun thing to learn about in your free time, but as global citizens, I think that it is incredibly important. We should learn current events in school. Taking three minutes at the beginning of class to read a few headlines could spark so much curiosity, action, and change.

One thought on “News Flash! by Sophie Browner”