Skip to content
HomeHumbled By My Heroes By Lily Roth 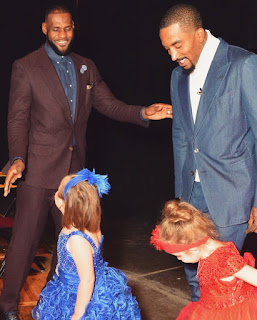 The Cleveland Cavaliers take on the runway with children of all ages to raise money for pediatric cancer.  On October 18th, the Cavaliers along with other athletes from the Lake Erie Monster, or “Big Shots” were each partnered with a “Little Star” which is the title for those children fighting against cancer.  The event not only raises money to cure cancer but also gives these children a night they’ll always remember with some of their heroes.  Lebron James JR Smith, Dwayne Wade, Kevin Love, you name it, and they were there with a smile on their face, ready to meet the kids that would eventually change their lives.  The Arena was transformed into a whimsical world of Alice in Wonderland for the annual fundraiser.  Flashes of Hope is an organization whose goal is to capture the good memories of children fighting cancer and funding research for a cure.  This event brought out 1,000+ of Cleveland’s business leaders and community figures.  With surprise guests such as the Mad Hatter and Queen of Hearts there’s it’s no surprise that all of the photos are filled with joyful children and adults alike.  One of the most well-known and inspirational children on the runway was eight-year-old Maisie Nowlin, a confident and positive little star.  She has a rare blood disorder so her life depended on a transplant.  Doctors took her within an inch of her life to save her it.  After the transplant, she got better then worse, then even worse. Maisie’s parents had to speak with her about dying. “We were going to have to tell her we are trying everything,” says Maisie’s mom in an interview.  Just then, Maisie turned the corner and headed back to school.  So she stood brave and proud on the 2017 runway to accept the Cleveland Clinic courage award.  This event does something powerful and admirable for the kids, it creates a night they’ll never forget.  As for the Cleveland Cavaliers, they make lifelong friends and role models of kids a third of their age.  Go Cavs for partaking in such a wonderful event, but go little stars, for being the people we all look up to every day of our lives.