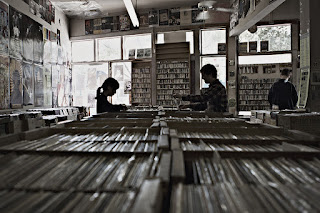 My boss is a Letter.
He wears blue every Friday, his hair (blond) is never combed and he is Zaccariah Finch. Little Debbie snacks are his best friend. His teeth are straight, he wore braces as a kid and he isn’t Zaccariah, he’s Z; A thirty-something year old nobody’s boy with a sleeve of ink and electric blue eyes that watch me persistently: when I’m stocking the shelves and the door chimes and in steps a middle aged couple drowning in laughter; when they spot me and request some forgettable album from the seventies and I point them toward the back; when I notice the clay they’re tracking––spreading––along this prehistoric tile and I sigh. Sweep; when they leave empty handed, still laughing about whatever and the door slams shut with a jingle; when it’s silent for a beat, save for the AC system in which Z has yet to have repaired, and I slide up to the check-out counter, requesting a ten minute break and he nods his head––Sure––and I go away.
I spend my nine minutes and forty three seconds standing beside Screaming Sammy’s hot dog stand, scarfing down a sub-par polish boy. The vendor attempts to make light conversation––Wonderful weather, eh?––but I’m not listening. I’m too busy looking for you, searching for you in every throng that passes. In every man I spot…Too busy despairing over your perpetual absence from the afternoon crowd. And I think I see you once. But that isn’t you holding the blonde’s hand, pulling her close and kissing her head. Hopping off the curb and entering a gray Camry. No. And I think I see you twice, but that isn’t you biting your nails, nor you scratching your nose before disappearing into Barry’s Books and Things to browse. I don’t think I see you again because I don’t see you. You’re not there––you never are––with your awkwardness and forced smiles. Your odd-colored tees and scuffed Chuck Taylors. It’s not you. And when I’ve had enough, when your non-appearance ticks me off,  I slip Sammy his five dollars and fifty cents––No, keep the change––and trek back to the shop.
Z is ringing up a customer (female) when I slip inside the store three minutes later. She’s tall and she tucks her hair (brown) behind an ear and she laughs at nothing. Her nails are pink. Her earrings dangle. She buys Led Zeppelin and she wears Prada and she is inclusive.
She says, “I’m buying this for myself.” As she taps the cover of Physical Graffiti and I know it’s a lie. She has curls, an embryonic Coach purse and she wears fuchsia like it’s her anthem. Her lips are purple. Her heels are high. She’s not a fan of Zeppelin, she’s the epitome of a Spice Girl and she is Viva Forever.
Z, he responds in that harsh, cumbersome way of his; only lifting a blond brow to appease her initially.  Then it’s this: Z handing the woman her money while his eyes are on me.
“Seven sixty is your change,” He remarks. “Have a wonderful day.” And the woman snatches her bag with a huff, leaving in her absence a haze of flowery perfume.

One thought on “I – by Indee Sanders”