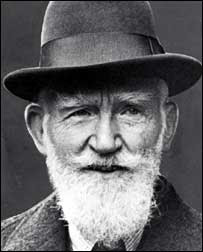 Sitting in my seat, I dreaded the moment that the lights would dim. I looked around the room at the  seniors shuffling to their seats and prepared myself for the fight that would ensue. My drooping eyelids and the sharp pain from sitting too long would be my two most formidable enemies this evening. My sister sitting next to me shared my sentiments, but my grandma was settling into her own seat quite contentedly. The reading of George Bernard Shaw’s Man and Superman was about to begin. I didn’t want to be pessimistic or bored, but a room filled with seniors and my mom’s phrasing of how my grandma would drag me to one of her Shaw readings didn’t inspire much hope within me.
The lights dimmed, the actors took to the stage. They weren’t in costume, they had their scripts in hand, and they took their seats on the stage. It was like no production I had ever seen, I don’t think that one could even call it a production. The actors, currently performing in shows in NYC, had only read through the play once before- that morning.
That evening rather than watch actors as they told a story, both the audience and the actors experienced the unfolding of the story together. We watched, enraptured at the actors on stage, but we also laughed with them when they slipped up and broke character for a brief moment.
When the show was over I was a touch forlorn, I wanted more. I was jealous of my grandma and the others in the room who would be returning for the reading next month. My jealousy dissipated as I watched as my grandma gleefully chat with the director and then as she won the giant bouquet of flowers. I laughed at the idea of us taking it home on the subway and then smiled as she gave away all but a small bouquet’s worth of flowers to the other patrons.
This was my introduction to Irish playwright, George Bernard Shaw, and it has cemented a special place for him in my vault of favorites. Shaw’s plays, written in the late nineteenth/early twentieth centuries, are not only works of art but also champion human rights.There’s no wonder why The Gringold Theatre Group chose to honor his works through Project Shaw.
By: Kathleen White