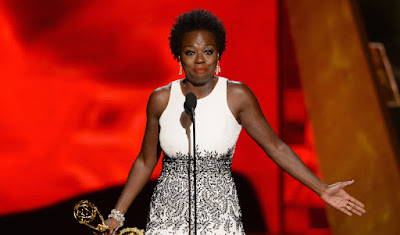 During her acceptance speech at the 2015 Emmy Awards, Viola Davis declared, “You cannot win an Emmy for roles that are simply not there.” Viola Davis had just become the first black woman to win the coveted award of Outstanding Leading Actress in a Television Drama. Although the Emmy’s have been celebrated for the past 67 years, it wasn’t until now that a black woman won this award, or even truly had a role that allowed her to win this award. Davis preached in her speech, “The only thing that separates women of color from anyone else is opportunity.” Although Viola Davis received this award for a television role, the lack of representation of black women as complex and non-stereotypical roles is also prevalent in the film industry. When the nominations for the 86th Annual Academy Awards were announced on January 15th, 2015, many were disappointed to see the lack of diversity among the nominees. Many took their disappointment to social media and began a social awareness campaign under the hashtag, “#OscarsSoWhite.” In 2016, with even less racial diversity among the nominees and winners, the hashtag returned, but with more of a yearning for diversity. Hollywood stars such as Jada Pinkett Smith and Spike Lee decided to protest the Oscars in order to bring awareness to the lack of diversity. They were highly criticized, even by other actors, such as Whoopi Goldberg, who thought that if they were looking to gain representation, they should make themselves seen at the Oscars. Regardless, the drama around an event, where the drama usually stays on the screen, brought the lack of recognition for black actors in Hollywood into the public eye. Black actresses all over Hollywood began to stand up for the opportunity for black actresses to escape the stereotypical archetypes and to begin playing “Oscar-worthy” roles. With the introduction of characters such as Annalise Keating, a very successful corrupt lawyer (played by Viola Davis), in How To Get Away With Murder  or Olivia Pope, a very prestigious crisis manager for a consulting firm (played by Kerry Washington), in Scandal on television, many have begun to push for the film industry to follow in this progressive trend. Yet, looking back, most of the successful recognized black actresses have received acclaim for playing weak archetypes. Although black women have gained more recognition for their work in Hollywood in recent years, they are usually recognized for specific archetypes promoting negative stereotypes. When looking at the eight powerful black actresses that have won acting Oscars, we see:

Things are looking up though. With major motion pictures such as Hidden Figures, starring Taraji P. Henson as a NASA mathematician, getting good press, the Oscar season may not be #SoWhite any longer.