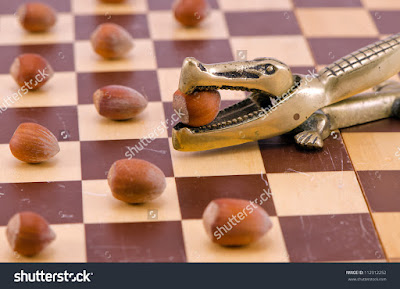 A tall, lanky man walked into the hotel lobby. His intuitive brown eyes scanned the room, looking over every person in detail; judging them as if they were being tried for a heinous crime. His gaze fell on an old grandmotherly woman with gray hair staring at a chess board in the corner. There was nobody on the other side of the table and the board was set up, ready for a game. The man smiled a thin smile, more of a smirk than anything else, and strode over to the old woman. He stood over her, pushed his spectacles up his nose, and demanded: “would you like to play a game?” The old woman smiled kindly up at him and retorted, “Oh golly. That sure would be lovely, but what makes you think you would even get one piece from me?” The fire crackled merrily at the other end of the room, a stark contrast to the atmosphere between the two chess players. All conversation in the lobby abruptly halted. All eyes were on the two chess players. “Ha!” exclaimed the man; “my Alekhine’s gun will show you what’s what!” The woman scoffed. “You’ll never break through my anti-Sicilian defense.” The man looked down at her and calmly replied: “my rook lift will leave in ruins.” Suddenly, the manager of the hotel walked into the lobby. He saw the two players nearly at blows and groaned loudly. “I’m so tired of these chess nuts boasting in the open foyer,” and walked out the front door.
Charlie Espy