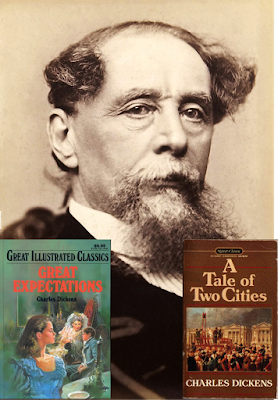 Charles Dickens…what can I say…I’m just bored by him. Let’s use some examples from school: Great Expectations and A Tale of Two Cities. Great Expectations is a story about a boy who meets a creepy, old guy in a cemetery. That creepy, old guy becomes the boy’s benefactor. There’s an old lady who serves no purpose whatsoever, except that she had a granddaughter that was a snobby, little brat that was the boy’s love interest. The granddaughter doesn’t even end up marrying him even though he drops everything in his life in order to go back for the girl. What is the purpose of the storyline here? I mean come on there’s no point writing a drawn out story about a boy who has a love interest, gets money for a creepy, old guy in the cemetery, and whose name is Pip of all names! Great Expectations does balance the amount of literary analyses but doesn’t have the story line to match. I could ramble on and on about Great Expectations forever, but let’s move on to A Tale of Two Cities. The storyline in A Tale of Two Cities is much better than that of Great Expectations, but still, how many literary analyses can a man write in just one book?! The storyline includes Lucy trying to save her soon-to-be husband from his impending death. She doesn’t save him but her “secret admirer” Sydney Carton does. SYMBOLISM, that is all this book is. Lucy is the Light, Carton is the person who makes a sacrifice for the one he loves (how cliche is that?), Madame Defarge is the darkness, and then there’s Darnay who is freed by a case of mistaken identity. There are so many allusions in A Tale of Two Cities that when you think you’re done with them, they come back a page later. A Tale of Two Cities, in contrast to Great Expectations, has a storyline but too many literary analyses for the length of the story all together. All in all, Charles Dickens can create a storyline and a fair amount of allusions but can’t combine them into one cohesive novel.