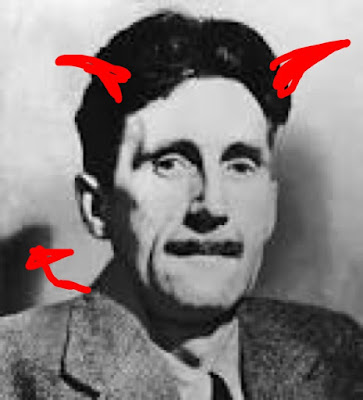 I have a confession. I tried; I really tried, to love his books. A dystopian society? Marvelous. A book of personal essays from one of the most famous writers of the 20th century? What could be wrong?
EVERYTHING. I despise George Orwell with a burning passion. Let me start this by saying, he is brilliant. He truly is. His writing is masterful and evokes thought and emotion.  For me, that emotion is extreme hate. In life, there is nothing I hate more than some lonely kid spewing their negativity onto the world. Now, that may sound cynical or rude, but it is true! Negativity in any form is just unproductive, especially with him.
For example, in his essay Shooting an Elephant, Orwell tells the story of when he was a police officer in Burma and he has to catch an elephant that has escaped and is wreaking havoc in  the town. As he is searching the town, he gains a following of natives so that by the point he finds the peaceful elephant eating grass, he has almost 2,000 “yellow faces” (another reason to hate him) encouraging him to kill the elephant. Basically, he shoots the elephant and has this whole revelation about how people in power have no freedom, and that imperialism sucks, and all that jazz. Orwell’s writing is brilliant in this piece. The way he structures and styles his words is beautiful. The content? Not so much. Orwell has SO much opportunity to elaborate on the beautiful symbolism of the elephant, but instead he spends the rest of the piece with selfish self-deprecation. As Foster (our junior year boo thang) says, an author doesn’t necessarily have to know the meaning behind their work. Orwell very well may have not truly understood the beautiful symbolism behind the elephant, but instead wrote this piece just to get people to feel bad for him! His narcissism, egotism, and pessimism is the reason I cannot stand this blubbering ninnie.
Orwell constantly writes about how society cuts down the human spirit, but in reality he’s the one cutting down my human spirit. That is all.